The State's Attorney Office effectively and aggressively advocates for victims and witnesses of crimes at every stage of the prosecution process, helps them navigate the often perplexing criminal justice system and ensures their voices are heard.

View the indictment list for cases initiated by the Maryland District Court and indicted by the Baltimore County Grand Jury. If your case of interest does not appear on this list, check after 3 p.m. on the Thursday prior to the scheduled preliminary hearing.

The Animal Abuse Unit collaborates with the Baltimore County Police Department and Animal Services to investigate cases of animal abuse, neglect and cruelty. The Unit also works with the Department of Social Services when there is a co-occurrence of crimes against people and animals. Charges can be initiated by an officer, but are typically initiated after communication between all agencies, as well as a veterinarian.

The Domestic Violence Unit is comprised of attorneys and specially trained investigators, who investigate incidents and the previous history between the victim and defendant, once charges are filed. Due to the sensitive nature of these cases, our office will not drop domestic violence charges until the investigation is complete.

U Nonimmigrant Status (U Visa) program

We are supporters of and willing participants in the U Nonimmigrant Status (U visa) program. If an individual is a victim of a qualifying crime and is cooperative in the investigation and prosecution of the crime, they can apply for U visa status. Those crimes include (among many others) felonious, assaults and acts of domestic violence.

It is extremely important to Mr. Shellenberger that victims of crimes of this nature not be deterred in reporting and prosecuting the crime as a result of concern about their status in this country. For this reason, we are committed to cooperating in the U visa application process. If you are aware of someone in this situation, we encourage you to reach out to an attorney or organization dedicated to assist those with immigration issues or concerns. If you have any questions about the process please feel free to email statesattorney@baltimorecountymd.gov.

The Office is pleased to offer internship opportunities to current law school and college students. Internships are not paid and require a minimum ten-week, 10 hours per week time commitment. Internships begin at the beginning of the spring, summer and fall semesters.

Interns can expect to assist attorneys with case preparation including but not limited to:

Interested persons should email a resume and cover letter to the internship coordinator at saointernship@baltimorecountymd.gov. Please note availability and area of interest. For fall internships, please email your cover letter and resume by June 15, spring internships November 15, and summer internships April 1.

Contact the resources listed below for help with the following:

About the State's Attorney 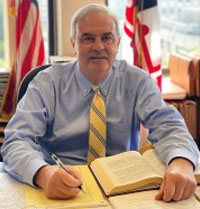 Mr. Shellenberger was born and raised in Baltimore County. He is a graduate of Loch Raven High School, Loyola College and the University of Baltimore School of Law. He fulfilled a lifelong dream when elected State’s Attorney for Baltimore County in 2006, and was re-elected in 2010, 2014, 2018 and 2022. Since his election, Mr. Shellenberger has been an effective advocate for crime victims not only in Baltimore County, but also across the State. He was instrumental in the passage of an expanded DNA law, which gave law enforcement agencies the opportunity to prevent violent crime. Since its passage, Mr. Shellenberger has traveled across the State training law enforcement agencies on the implementation of the law.

Learn more about the State's Attorney's career below.

Member of Genetic Genealogy Work Group. A panel of professor’s, geneticists, law enforcement, and State’s Attorney’s working to create a bill to find a balance between public safety and a constitutional right to privacy. The group came up with a bill that turned into House Bill 240, which passed and became law on October 1, 2021. It was a first in the nation law that limits when law enforcement can search consumer genealogical databases in connection with a crime.

Scott was appointed to the Juvenile Justice Reform Council.  This Council is charged with:

Scott was appointed to the Task Force to Study Crime Classification and Penalties. The task force is to study and make recommendations on issues related to the classifications of and penalties for criminal and civil violations in the State.

Member of Maryland Justice Reinvestment Coordinating Council. Members meet to craft a framework of sentencing and corrections policies in the State with a goal of safely reducing the number of inmates in Maryland prisons, reducing spending on prisons, and reinvesting those savings in strategies’ to increase public safety.

Governor Hogan appointed Scott to the Justice Reinvestment Coordinating Council. That Council made recommendations to change Maryland's Criminal Justice System that were later passed into law.

Mr. Shellenberger was appointed by Governor O’Malley to the Maryland Commission on Capital Punishment where he consistently advocated for the retention of the death penalty as a tool in the fight against violent crime. The Commission ultimately voted to recommend a repeal of the death penalty. Mr. Shellenberger authored the Commission’s Minority Report. Maryland lawmakers abolished the Death Penalty in 2013.