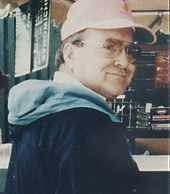 Baltimore County police are continuing their search for clues to a Cockeysville man’s disappearance. Thomas Gregory Demyon was 47 years old when he left his townhouse on the evening of January 13, 1997.

Demyon drove away from his house in the unit-block of Gurteen Court in Cockeysville at around 6:15 p.m., driving to a nearby motel to use a pay phone; the home phone had been disconnected. His car, a 1989 dark blue Pontiac Bonneville, was found on February 20, 1997 in the 1800-block of North Calvert Street in Baltimore City. No evidence of foul play was discovered.

Mr. Demyon was the vice president of Safety/Sight Incorporated in Cockeysville, a firm founded by his late father. He was an avid gambler, and frequented Las Vegas, Atlantic City, and the horse tracks, and was apparently in debt to several gambling associates.

The victim was reported missing by his wife on January 14, 1997.

He is described as a white male, 5'10" tall, 230 pounds, with a large build, blue eyes, and fair complexion. He had blonde hair and was balding. When last seen, he was wearing a green "Resorts" jacket, and tan pants.