County offices are closed on Monday, July 4, for Independence Day.

Notice — All Trash, Recycling and Yard Material Collections scheduled on or after Monday, July 4, will occur one day later that week. Find your schedule. 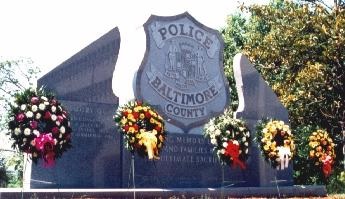 A new Baltimore County Police Department Memorial was dedicated at the County seat in Towson on May 21, 1996. The 15 by 10 foot blue granite monument replaces a previous 21-year-old memorial, which was located at a suburban intersection two miles from the government center. Because of increasing highway growth, the location had become a high-traffic area making it inaccessible for ceremonies and general public recognition. The new setting, a spacious courtyard with a fountain, walkways and landscaping, surrounded by County court and office buildings, improves citizen access.

The impressive tribute consists of a carved replica of the Department badge, flanked by two memorial tablets engraved with the names of those who have died in the line-of-duty since the Department was established in 1874.

The inscription reads, "In lasting memory of those officers and families who made the ultimate sacrifice. Blessed are the peacemakers for they shall be called the children of God. Matthew 5:9."

Funds for the memorial were raised through the efforts of a committee of private citizens and businesspersons who responded to the need to replace the former monument with a more enduring and accessible memorial.

Officers Who Lost Their Lives in the Line-of-Duty

Ten officers have lost their lives in the line-of-duty in the history of this department.

In December 1969, Officer Edward Kuznar died as a result of a traffic accident. While on traffic patrol, Kuznar was hit head-on by a driver who crossed the center line and plowed into his police car—killing both the officer and the driver.

Officer Charles Huckeba left a wife and young son when he was gunned down in July 1977 while attempting to talk a barricaded suicidal youth into surrendering.

Responding to a call for assistance from fellow officers, Corporal Samuel Snyder, a thirty-year veteran of the department, was shot in August 1983 by a deranged subject. Snyder died 10 days later as a result of his wounds.

On November 5, 1986, Officer Robert W. Zimmerman was struck in traffic and critically injured. The 41-year-old officer died nine days later as a result of his injuries.

On February 7, 2000, Sergeant Bruce Prothero was shot and killed during an armed robbery. He was a 12-year veteran of the Baltimore County Police Department. Sergeant Prothero was married and the father of five children.

Officer John Stem died on October 19, 2000 of complications of paraplegia caused by a line of duty gunshot wound he suffered in July 1977.

Sergeant Mark Parry died on January 21, 2002 from injuries sustained in a motor vehicle accident. Sergeant Parry was on routine patrol when a drunk driver struck his unmarked police car. The driver fled the scene and was arrested a short distance away. Sergeant Parry was married and the father of three children.

Lieutenant Michael Howe died on August 11, 2008 as a result of a massive stroke. On August 10, 2008, Lieutenant Howe was with his unit at the scene of a murder-suicide in Precinct 4-Pikesville that Sunday morning. When he returned home after that incident, he collapsed, and was taken to Johns Hopkins Hospital where he died the next afternoon.

Tactical Officer Jason Schneider, 36, died at Shock Trauma after being shot while serving a warrant in Precinct 1-Wilkens on August 28, 2013. An investigation in an August 19, 2013 shooting on Winters Lane in Precinct 1-Wilkens led detectives to a home on Roberts Avenue. Tactical Officer Schneider was fatally shot after an exchange of gunfire with a subject inside the Roberts Avenue home.

On May 21, 2018, Officer Amy Sorrells Caprio, 29, responded to a call for a suspicious vehicle with multiple suspicious subjects walking around homes on Linwen Way in Precinct 8 Parkville. When she arrived and located the vehicle, she got out of her police car and ordered the driver to exit the vehicle. Instead, the driver accelerated and fatally struck Officer Caprio. She was nearly a four-year veteran of the Department and was married. Officer Caprio is the first female line-of-duty death in the Department's history.