The Auxiliary Police Team is a volunteer organization that provides police presence at schools, community/civic events, emergency situations and in the capacity of responding to calls for service.

The BCoPD Aviation Team— based out of the Martin State Airport in Middle River, Maryland—provides 16 hours of patrol coverage nearly every day, with 24-hour, on-call availability in case of emergencies. The helicopters are tools that are crucial to officer safety because they provide command and control, and valuable information during critical incidents, including: 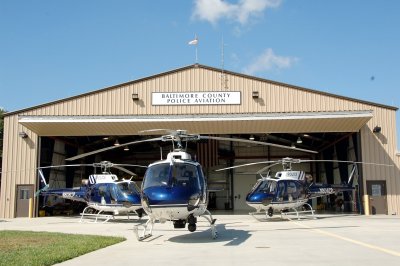 The Team operates three Airbus AS350B3 helicopters with the designated call signs of “County Air” 1, 2 and 3. The helicopters are equipped with:

In 2020 the Aviation Team flew nearly 2,000 flight hours and responded to more than 4,000 calls and activities in support of patrol, specialized units, neighboring jurisdictions, and federal agencies. The total calls for service included more than 2,200 searches and resulted in 403 arrest assists, the recovery of 11 LOJACK equipped stolen vehicles and the location of 83 critical missing subjects, who returned home or to a medical facility.

The Aviation Team consists of the:

The pilots serve a dual role as pilot and TFO and must be proficient in the TFO skill set. Pilots and TFOs are selected from within the ranks of BCoPD.

Pilots and TFOs must complete a selection process including:

To be eligible to apply for the officer and pilot position, applicants must possess:

To be eligible for selection as a TFO, applicants must have a minimum of five years of commendable departmental experience. TFOs come from varied backgrounds within the department in the fields of patrol, traffic and criminal investigation.

The Forensic Services Section (FSS) is dedicated to providing accurate and objective scientific support for criminal investigations through the work of expert forensic scientists and highly-trained and experienced police professionals. The FSS is currently accredited by the ANSI National Accreditation Board (ANAB) to the ISO/IEC 17025:2017 standard and recognized by the state of Maryland as a forensic laboratory.

The FSS consists of a mobile crime scene team and comprehensive forensic laboratory team, which provides services including expert testimony, for the following disciplines:

Watch the video to learn about the open positions in the Forensics Lab and apply online.

The Biology Unit receives over 400 requests per year for analysis of a variety of crimes. The analysts screen evidence for the presence of bodily fluids and conduct DNA analysis on probative samples. The Biology Unit consists of a Supervisor and six DNA Analysts, which adhere to the Federal Bureau of Investigation’s (FBI) Quality Assurance Standards for Forensic DNA Testing Laboratories. This enables the Biology Unit to participate in the FBI’s Combined DNA Index System (CODIS), giving Baltimore County the ability to compare DNA profiles developed from local crime scene evidence to convicted offenders, arrestees and other crime scene evidence profiles all across the country.

The Chemistry Unit consists of a Supervisor and seven Chemists that analyzes evidence submitted by investigators for the presence of controlled dangerous substances (CDS) by using a variety of techniques to include:

The Chemistry Unit is licensed by the state of Maryland and registered with the U.S. Drug Enforcement Administration, in addition to abiding by the additional requirements of these entities regarding procurement, transfer, possession, storage, use and disposal of CDS.

The Digital and Multimedia Evidence Unit (DMEU) consists of a Supervisor as well as:

The Evidence Processing Unit consists of two Forensic Analysts that

The Firearms Unit consists of:

The Firearms Unit is an established IBIS (Integrated Ballistics Identification System) Site recognized by the U.S. Bureau of Alcohol, Tobacco, Firearms and Explosives (ATF). This recognition authorizes the Unit to access the National Integrated Ballistic Information Network (NIBIN) database. Access to this database enables Baltimore County to compare evidence submitted for image capture from local crime scenes to other crimes or firearms in the NIBIN database. 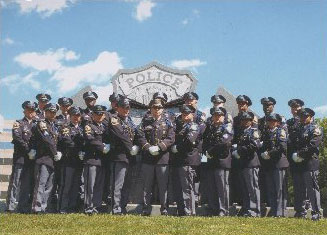 The Honor Guard is a volunteer unit consisting of 25 members that participate in approximately 75 events each year. Such events include police funerals, presentations of the colors at civic affairs and community parades. To request the services of the Honor Guard or to learn more, contact Captain Jeffrey Hartman at 410-887-2819 or jhartman@baltimorecountymd.gov, or Corporal Patrick Wilhelm at 410-887-5000 or pwilhelm@baltimorecountymd.gov.

The K9 Unit currently has 27 dogs handled by 24 officers, and consists of four explosive detection canines and three search and rescue bloodhounds. The Unit provides:

The Patrol and Narcotics Team responds to 6,000 service calls a year, which include deployment to over 1,000 criminal incidents and 300 searches of controlled dangerous substances.

Patrol canines go through 16 weeks of basic patrol training before they are certified, which includes:

After completing the initial certification, each patrol K9 must re-certify annually while performing 16 hours of maintenance training each month. The patrol canine then receives eight additional weeks of training in the detection of controlled dangerous substances, which includes which includes building, vehicle and area/field searches, as well as scent discrimination.The skill of detection is also tested annually in order to keep the patrol canine certified.

The Explosive Detection Team responds to 30 searches each year for criminal incidents and for the safety of public venues, which includes trains, aircrafts and ships.

On average, the K9 Unit responds to 30 Search and Rescues Team events each year for critically missing and endangered persons.

The bloodhounds are given 10 weeks of training, which includes scent discrimination/article collection and trailing. The bloodhounds certify annually through the National Police Bloodhound Association and perform 16 hours of maintenance training each month.